Black mould is an ever increasing problem within UK properties. We as Cardiff Roofers get regular calls which relate to this matter. The common call is usually customers looking for roofing services to combat the problem. We regularly deal with both residential home owners and landlords in Cardiff and the most common topic of conversation is the increased amount of mould growth in the property especially on external walls. 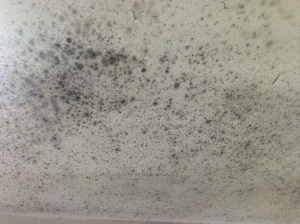 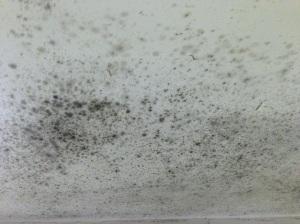 This is a major issue as once the mould is there it becomes easily transferable to personal belongings and can spread fast into the paint work.

The main cause of mould is excess moisture within the atmosphere or in the area itself. This combined with a wall or item that is cold will have a similar effect to water on the interior of a window that has condensated. After this occurs a few times it will generate mould. This a common reason why window seals go dark and blackened.

This mould will multiply fast if it is not treated and the source of the moisture is not removed.

Should I be concerned?

Well yes and no is the simple answer. If the matter is quickly identified and treated correctly then no. If the matter is left to spread then it will cause harm to the property and it will become difficult to remove especially if it penetrates deeply into the plaster work.

What can I do?

This all depends on what stage it is at. Please see below for the stages

Excess water/moisture on the wall or on the window sill – As soon as you see it remove the water. Do not leave it to dry naturally. Most of the time it will not dry up fast enough. Open the window to vent out the moisture or place the window on the first locking catch which allows it to be open enough to vent but locked for security.

Invest in a moisture absorbing box. It seems gimmicky but they do work. I normally pick some up from ASDA and Wilkinson also have the model that we use. These will trap extra moisture in the rooms.

Black mould forming on the walls – Using a mould removing solution which you can buy from local superstores or DIY stores. You can also use a solution of bleach and water  (although this can damage paintwork or items) which is just as effective if left for a few minutes to kill the mould spores. 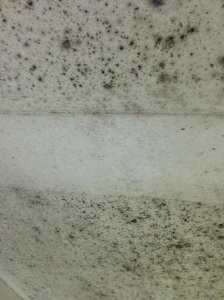 Once it has been completely removed use a anti mould paint. My preference is Delux or you can also by an additive  which can be added to a tub of standard matt or emulsion. These paints work on a principle that they remove the ingredients from the wall that the mould feeds on, contrary to opinion that they actually stop the mould with a special ingredient.

You must still eradicate the moisture as there is no magic paint that will remove mould if there is excess amount of moisture. Please see above for the moisture absorbing box.

Another method of removing excess moisture is using a humidistat extractor fan which can be fitted in bathrooms or kitchen. We have also been contracted to many letting agents and landlords in Cardiff to fit them in their bedrooms.

Our favored method of installation is in the ceiling. We then use a roof vent to extract out of the property.

Roofing issues that cause the problem

We don’t want to pass the buck as there are roof related issues that do cause problems in certain instances.

If there is no insulation in the lofts and cavity walls this will create cold spots for the moisture to condensate and the damp to form.

Blocked guttering or insufficient roof coverings may allow water to enter into the property which will cause increased moisture.

Insulation is great but most installers forget to install roof vents which will cause sweating in the loft space.

Yes we can. If you have tried the basic procedures set out above there may be an underlying issue, for which we will have a Roofing service that may rectify the issue.

It is important you first look at the obvious issues such as living arrangements and combating any moisture caused by drying clothes or poor ventilation.

If this fails then it may be time to consider the roofing issues.

Why not give Smart Roofing Services – the reliable Cardiff roofers a call.